Corinth was one of the most famous cities of the ancient world. Located adjacent to the isthmus that joined central Greece to the Peloponnesos, Corinth controlled the land routes across the isthmus as well as those between the adjacent bodies of water, the Corinthian Gulf to the west and the Saronic Gulf to the east. Corinth established harbors on both; Lechaion on the Corinthian Gulf and Kenkhreai on the Saronic Gulf. The city included as its acropolis Akrocorinth, a 573 m asl outcropping of rock that rises up only 8 km to the south of the Corinthian Gulf and as such was a strategic military location commanding both land and sea routes. The land immediately to the south of the Corinthian Gulf was a rich agricultural plain that was famous in antiquity. The early political history of Corinth from the 8th century B.C. includes the aristocratic Bacchiadae who were overthrown ca. 650 B.C. and succeeded thereafter by a family succession of tyrants, Cypselus and his son Periander. 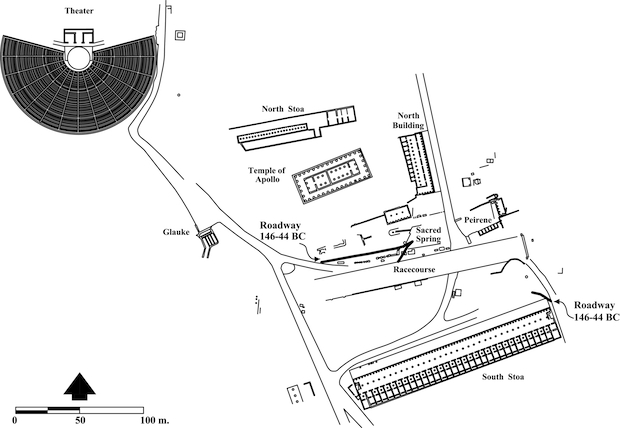 The earliest city of Corinth was a loose collection of communities that were at some distance from one another. The Archaic and Classical city of Corinth grew up to the north of Akrocorinth, some 5 km south of the Gulf of Corinth on a limestone plateau approximately 80 meters above sea level. By the fifth century B.C. the city was surrounded by a fortification wall and by the 4th century B.C. also included long walls to the Gulf of Corinth to its harbor at Lechaion. By the 6th century B.C. the Upper Lechaion Road Valley and nearby areas were filled with cults, hero shrines, springs, buildings and monuments as well as a race track, and a series of roadways approached this valley from various directions. The successive temples of Apollo dominated the city of Corinth from Temple Hill and the fountain houses of Glauke and Peireine were found not far away.

In the 8th century B.C. Corinth had founded important colonial cities to the west, to Kerkyra, Apollonia and Syracuse, to name but a few. Corinth was a leader among Greek cities as it had an early example (seventh century B.C.) of a Greek Doric temple, the Temple of Apollo, as well as having the first example in the Greek world of terracotta roof tiles for its roof. Corinth was also well-known for its pottery that was traded all over the Mediterranean. Its Proto-Corinthian style, first developed by 725 B.C., was sent out to many of the earliest colonial Greek sites. Corinth invented the black-figured technique of vase painting 625-600 B.C. that was copied all over the Greek world.

During the Archaic and Classical period Corinth often allied itself with Sparta and against Athens and during the Peloponnesian war Corinth fought on the side of Sparta. During the 4th and 3rd centuries B.C. a Macedonian garrison occupied Acrocorinth under the control of Ptolemy I, Demetrius Poliorcetes and Antigonos until being captured by Aratus in 243 B.C., when Corinth joined the Achaean Confederacy. In the 2nd century B.C. Corinth was a leader among the Greek cities in their opposition to the coming of Rome in Greece. As a result, the city of Corinth was singled out among all the Greek cities and sacked by the Roman consul Lucius Mummius in 146 B.C. who, according to tradition, killed all the men and sent all the women and slaves into slavery. The city was abandoned and it was deprived of a political identity until Julius Caesar founded a new Roman colony on the site of the former Greek city, Colonia Laus Iulia Corinthiensis. The Roman colony imposed a new urban plan for the city as well as a new rural organization to the land of the Corinthia. Later in the 1st century A.C. a second Roman colony was instituted at Corinth under the Emperor Vespasian, Colonia Iulia Flavia Augusta Corinthiensis. Corinth has been continuously occupied through the Late Roman, Byzantine, Frankish, Venetian, Turkish periods and into the modern day where today it is a small village. Modern Corinth was moved 8 km to the Gulf of Corinth in 1858. The successive ancient cities of Corinth have been under excavation and study by the Corinth Excavations of the American School of Classical Studies since 1896.