This page discusses the east-west roads (decumani) seen in the city plan. Continue reading below for an individual description of each road.

This roadway is one of the principal east-west thouroughfares within the heart of the Roman City. Located approximately 245 meters to the north of the rostra in the forum. The roadway connects the eastern aspect of the theater with the unexcavated monuments of the eastern city. Decumanus II north intersects the cardo maximus at a point that must have been one of the principle intersections of the Roman city. The length of the road is likely to have been approximately 400 meters.

At the point where the roadway meets the area of the theater there exists a monumental gateway. The roadway is paved with hard limestone by the second half of the 1st century A.D. and is characterized by a sidewalk and a colonnade on both sides of the street. The exact width of the street is not known but it is wider than 4.75 meters. The roadway was restricted to pedestrian traffic and together with the Lechaion Road cardo maximus it created an urban armature for pedestrian use.

This east-west roadway was one of the primary arteries of the Roman city. Extending some 2200 m. from east to west, the roadway linked the Greek circuit wall at its northwest corner with the north central part of the Roman city. The roadway also extended to the east in the city to the area of the amphitheater. This roadway was open to wheeled traffic for its entire length and was likely one of the principal roadways used for commercial purposes during the Roman period.

This roadway was an important component of the Roman insular city plan that was imposed on the former Greek city in the first century B.C. The Lechaion Road as the cardo maximus was the principal north-south artery of the Roman city plan.

One of the principal east-west thoroughfares of the Roman city of Corinth. This road passed immediately to the south of the forum and extended over 2 kilometers. The road was, by the last quarter of the first century A.D., paved with limestone blocks and measured between 3.59-3.77 meters wide, with sidewalks on both north and south sides of the street. Wheel ruts in the limestone paving blocks indicate that this roadway was used for wheeled traffic and was likely to be one of the major commercial arteries of the city. 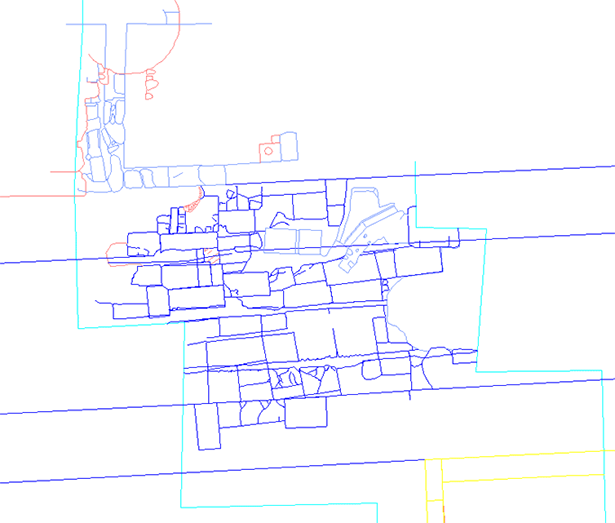 Actual State of a section of the decumanus.