Prior to the construction of the Lechaion Basilica, the Greek North Building occupied the area south and east of the Temple Hill. Most of its structural remains are lost, due to the extensive reuse of Greek building material at the time of the establishment of the Roman colony.

There were two major phases in the construction of the basilica, although there is little evidence with which one may definitely date these phases. The first basilica appears to have been built during the Augustan period, probably during the last quarter of the 1st century B.C., as the craftsmanship of the blocks used for its construction very closely resemble examples from this period found elsewhere in Corinth. The first basilica was destroyed during the 1st century after Christ, possibly by a serious earthquake in the 70’s A.D. which damaged large parts of the city. Probably in the first half of the 2nd century after Christ, the Basilica was completely rebuilt in accordance with a modified plan. The final destruction of the building took place at the end of the 4th century after Christ. The destruction may be linked to another earthquake that took place in A.D. 375 and which also caused major damage throughout the ancient city.

The Augustan Basilica consisted of a long, narrow nave, surrounded by a colonnade of 11×4 columns. The eastern part of the building, which is at the level of the Lechaion road, is basement level. Along this road was a series of shops, which actually formed the basement of the Basilica’s eastern aisle. At the southern end of the main floor of the Basilica, three rooms, which were separated from the main hall by a colonnade, were integrated into the building. These 'Chalcidian rooms’ were located at the main entrance coming from the direction of the Forum. In the rear half of the building there may have been a tribunal-like structure, although this section is not well enough preserved for a definite identification.

The second Basilica was considerably larger than its predecessor. It consisted only of the main hall and surrounding colonnade. Fragments of the order of the columns have been found near the building. At the southwestern corner there may have been an entrance into the Northwest Stoa reconstructed during the Roman occupation.

Pictures from the Basilica 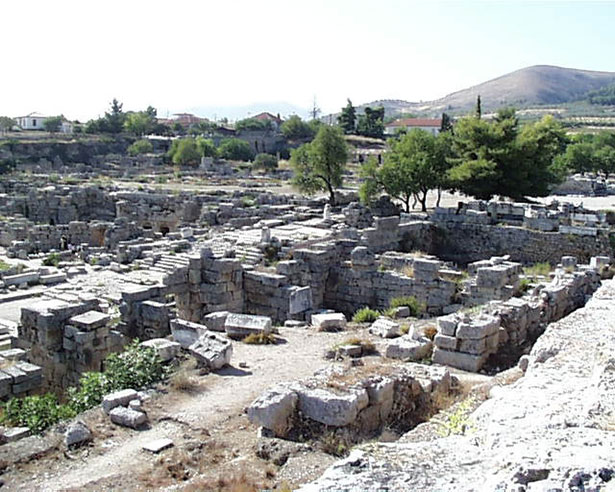