One important area of Corinth that remains virtually unstudied is the region to the northeast of the forum, identified as having an unexcavated Roman amphitheater. In an attempt to better understand this area and how it relates to the overall Caesarean city plan, the lab analyzed the cartographic attributes of the amphitheater and its environs.

The remains of a large amphitheater are visible approximately 1000 meters to the northeast of the forum. A large (78.6 X 51.6 m.) elliptical depression in the modern fields mark the remains of the ancient facility (Fig. 1). The floor of the structure, arena, and the stone seats were cut out of the bedrock and it is likely that the original superstructure was constructed of wood.

The location of the amphitheater, in the northeast corner of the “drawing board plan” of the Caesarean colony of 44 B.C., would be have been in keeping with the design of Roman cities, where amphitheaters were commonly situated immediately inside or outside the limits of the city. A roadway, cardo XXVII east, approaches the amphitheater from the south and served as the principal access to the structure (Fig. 2).

The amphitheater was the place where gladiatorial games, munera gladiatoria, were held. Gladiators were usually prisoners of war or condemned criminals and were known to be of four types: the murmillo who carried a short sword, a rectangular shield and a helmet with a fish crest; the Samnite who had a short sword, oblong shield, greaves and visored helmet; the retiarius who fought with a trident and a net and the Thraex who carried a round shield and a curved sword. Other events that likely occurred in the amphitheater included wild animal hunts, venationes.

These photographs illustrate the amphitheater in the early twentieth century.

The illustrations below are 3D models of the amphitheater region that where made by digitizing 1:2000 topographic maps. After digitization in AutoCAD, the contour lines were assigned their appropriate Z value. The 3D contour lines were then imported into ArcView and a either a wire-frame model or a Triangulated Irregular Network (TIN) was rendered. The final stage before analysis was to drape ground level or aerial photograph over this 3D model for further ground cover relief or enhanced visualization.

Figure 9 illustrates the 3D contour lines combined with a TIN skin. Figure 10 illustrates a 3D model with various shades of color denoting elevation change. Figure 11 illustrates the “drawing board plan” of the Caesarean colony of 44 B.C. draped on top of the 3D model.

The figures below (Fig. 12, Fig. 13, and Fig. 14) demonstrate how this type of computerized data can be used for interpretative purposes. These figures show a low level aerial photograph draped on top of the initial 3D model. Remote sensing, slope analysis and historic view sheds are examples of useful research that can be conducted with this type of 3D data. 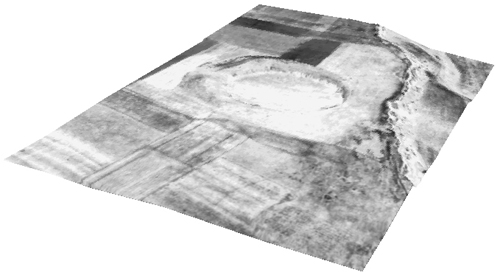 For instance, in regard to the gladiatorial shows the Athenians have so actively emulated the Corinthians or really have surpassed them and all others in their mad infatuation, that whereas the Corinthians watch these combats outside the city in a gully, a place that can accommodate a crowd, but otherwise is dirty and such that no one would even bury a freeborn citizen there…

Listen to a Real Audio broadcast from Philadelphia’s National Public Radio Station WHYY. The show “Radio Times” features a discussion of Roman gladiators. This radio broadcast features Professor Brent Shaw, Department of Classical Studies, University of Pennsylvania. This show was aired on May 6, 2000. Fast forward to the 1.05 hour mark to hear the discussion on gladiators. Click on the Real logo to download and install the free plug-in.