During 1993 we have added two satellite images of the Corinthia to our data set; a panchromatic scene from SPOT (Fig. 1), the French satellite agency, and a multi-spectral scene from LANDSAT (Fig. 2), the US satellite company. The image from SPOT is a single spectral band scene, gray scale, acquired in May 1991 at the resolution of ten meters (per pixel) and covers an area of 60 X 60 kilometers. The LANDSAT scene, on the other hand, is an EOSAT archive image acquired in June 1987 with a resolution of 28.5 meters. 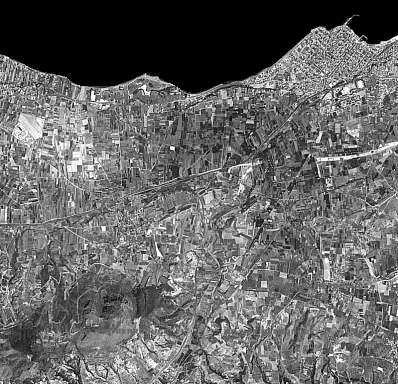 It covers a larger area of 185 X 170 kilometers and is a Thematic Mapper™ scene with seven colored spectral bands that can be displayed individually or in combination with others. The different nature of the two satellite images has dictated very different uses for them. One can see roads and agricultural field boundaries clearly on the SPOT image and, therefore, we are using it to analyze the patterns in the landscape along the southern coast of the Corinthian Gulf between Corinth and Sikyon. We have been able to identify uniform grid systems conforming to the practice of Roman centuriation. This particular study has been carried out using AutoCAD and CAD Overlay by measuring road and field spacing on the image and testing against various hypothetical grids of Roman land division. 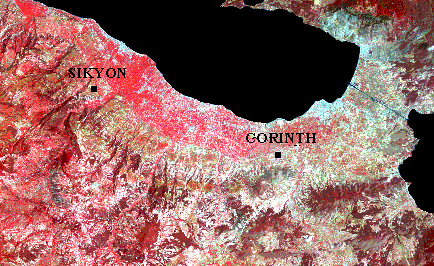 The grid systems are created in AutoCAD and can be superimposed on the satellite image using CAD Overlay. The preliminary success of this investigation has lead us to purchase an additional SPOT image, a 15 minute by 15 minute window to the east of Corinth so that we may in the future study the land organization to Corinth’s second port of Cenchreai on the Saronic Gulf. The LANDSAT image is of coarser resolution (28 meters per pixel vs. 10 meters) and, therefore, is better suited to studying land use pattern, ground cover and geological interpretation. In the future we may consider these well known applications of the LANDSAT multi-spectral scene in this study.

The SPOT satellite image came in the BIL (band interleaved by line) format, which was imported into the various kinds of software that we use, e.g., IDRISI. The original SPOT image was shipped to us on a series of twenty-two 3.5” diskettes which proved to be somewhat of a challenge to download and decompress. The more recent 15 minute window from SPOT was shipped on a compact disk, which greatly facilitated its use. The total size of the larger SPOT image is approximately 50 MB while the total size of the LANDSAT image is approximately 360 MB. These large files are stored on an auxiliary optical disk (Panasonic Optical Disk Drive LF-7010) and parts of the scenes have been clipped for processing and analysis as necessary. The LANDSAT scene came on mainframe 'computer compatible tapes’ (CCT), which necessitated the use of university facilities to download the files onto our PC’s. This was accomplished by utilizing a 250 MB tape backup system (Colorado Jumbo Trakker).