The map (figure 1) above shows the location of the images that will be shown and analyzed below. Each image is located on the map with a date in red. This map shows the plan of the village center in 1831 (dark blue) and in 1963 (light blue). Click on the dates in the map in order to instantly scroll down to the discussion of that image below.

There are three views of the central mosque and the bazaar in my collection, but I do not yet have permission to show the third, which is a view from the south. The two pictures, (figure 2, figure 4) however, showing the central mosque, the bazaar and several of the roads, confirm the identification of the old bazaar with the modern plateia, the identity of the Turkish roads in the area with the modern roads, and the shared site of the mosque and the modern church. This is supported by the comparison between the 1963 map and the 1831-33 map as shown in figure 1 above.

The images provide other evidence for the appearance of the village in the 19th century beyond just its layout. The three of them together provide a view of the central mosque and the area around it from three different sides, providing a kind of 360 degree view of that central neighborhood. 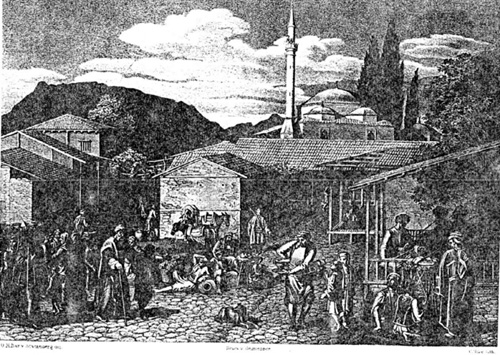 Although figure 2 is not labeled, it seems to be a likely candidate for the village bazaar that is described by the travellers. Behind the bazaar is a large mosque with a short minaret and (to its right) a small outbuilding, probably hexagonal or octagonal. To the left of the building with the horses in front is what appears to be a street—one can just make out the people walking down it away from the bazaar. The distinctive outline of Mount Gerania, with the projection at the far right, makes it clear that the view is taken looking east. Using the location of the bazaar and central mosque from the 1831-33 map as a guide, it seems likely that that is indeed what this image is. 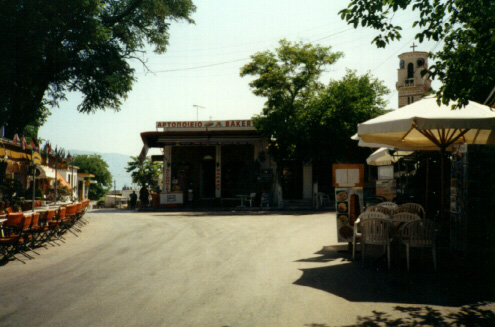 One can compare this image with a modern photo, figure 3, taken of the east side of the modern plateia with the church in the background. A side-by-side comparison shows that it is strikingly similar. In figure 1 where the 1831-33 map is superimposed on top of the 1963 map, it is easy to see that the modern church (in light blue with a cross at center, to the left of the word “plateia”) is built on the site of the old mosque (the two small dark blue hexagonal builidings on top of the church and the dark blue rectangular building with the semicircle attached just above and to the left of the church) and that the modern bazaar is on the site of the old. The roads in this area also seem to be on their pre-independence locations; the one to the right of the Von Stackelberg image is the same as the one in the modern photograph. This evidence confirms the similarities of the two town plans and the location of some of the central features of the old village.

Side-by-side comparison of figure 2 and figure 3 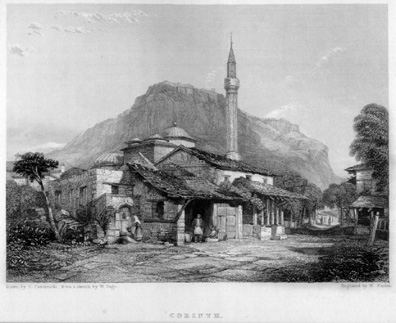 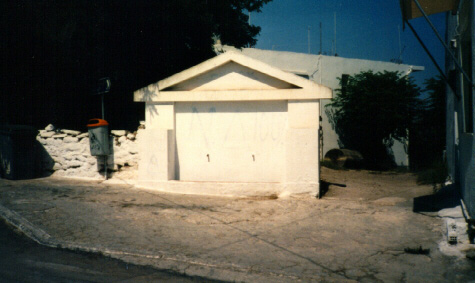 And finally, the fountain in the central foreground clinched the identification; as seen in the modern photograph, figure 5, there is a fountain which is now located on the other side of the same street. A side-by-side comparison shows this similarity.

Descriptions which use the remains of the temple, the bazaar or the central mosque can now be examined with an eye towards placing them.

Side-by-side comparison of figure 4 and figure 5

“The Houses are more spruce here, than ordinary; and the biggest quarter is, where the Bazar, or Market place is, consisting of about fourscore, or an hundred Houses. There are two Mosques here, and one small church, called Panagia; at which the Arch-Bishop liveth, who was then absent: and few Marks either of his, or St.Paul’s Preaching, Pains or Care of ; this famous Church of Corinth are now to be observed there.” (439-440)

“There is also another Ruin on the North-side of the Bazar, of Brick-work; which looks like part of some Temple or a Roman Bath.” (440)

“In going from the area of this building towards the magnificent remains of a Temple now standing above the bazar whence perhaps the doric pillar already mentioned may have been removed, we found the ruins of antient buildings; particularly of one partly hewn in the rock opposite to the said temple.”

“...This temple occupied the same situation with respect to the agora that the present ruin does with regard to the Bazar; and it is well-known that however the prosperity of cities may rise or fall, the position of the public mart for buying and selling usually remains the same.” (555)

“The town was entirely destroyed during the last revolutionary war, but a few houses are rising out of the ashes; the bazaar is tolerably supplied…” (60)

“The whole of the houses, with the exception of those just built, in the centre of the village, being heaps of ruins, destroyed by the Turks, or deserted by the inhabitants who have been thinned by the sword and the plague. Bare mud walls, roofless tenements and the shattered remnants of Turkish mosques present themselves on either side…We traversed a rugged path over stinging-nettles and stones, past a fragment of a marble column to the principle street, consisting of a few houses of wood and shops.” (16)

“Climbing over masses of masonry and by ruined walls, we at length arrived in the main streets of Corinth. Here there was some little appearance of life and trade, of which the suburbs gave no promise; houses were building and shops were opened, in some of which we recognized the handiworks of Birmingham.” (100)